Aqua Terra 2022 Beijing Winter Olympics Watch
​Winter is coming, from Tokyo to Beijing, from summer to ice and snow; Different stadium, the same dream. The 24th Winter Olympic Games will kick off in Beijing on February 4, 2022, making Beijing a unique double Olympic city. OMEGA, a timing partner of the Olympic Games, recently released a special edition watch for the Winter Olympics, the Aqua Terra BeiJing 2022.

OMEGA has been the official timing partner of the Olympic Games for 29 consecutive times since 1932 -- to be precise, the International Olympic Committee's (IOC) global partnership with the official OMEGA timer will continue until 2032, including the 2022 Beijing Winter Games and the XXXV Games (2032). Omega has participated in 29 Summer and winter Olympics to date, and Omega's timing equipment and technology has been used to record the performances of the world's most talented athletes. Beijing 2022 will be Omega's 30th time as the official timekeeper.

In keeping with its tradition as the official Olympic timekeeper, Omega released a special edition of Seamaster Diver 300M in February to celebrate the one-year countdown to Beijing 2022. Now, 60 days before the Beijing opening ceremony, Omega has unveiled the Seamaster Aqua Terra Beijing 2022 edition, featuring an ice white textured ceramic dial designed to evoke a winter sports atmosphere.

Aqua Terra is one of my favorite seahorses. While it may not be as prestigious as the Rolex DateJust, the Aqua Terra is actually part of the Seahorse range (its full name is actually "Omega Seahorse Aqua Terra 150M). The Aqua Terra is not a professional diving watch like most of its Seahorse siblings, but a classic luxury sports watch that trades the unique features of scuba diving for a refined and highly versatile aesthetic, yet with 150 meters of water resistance, it's sturdy enough to accompany you on all of life's adventures.

The new Aqua Terra continues the "fun" route, with its teak style deck replaced by a seemingly frozen dial. Here Omega recreates the ice pattern of randomly formed ice crystals - created using lasers to cut the pattern onto white ceramic (zirconia) dials, in homage to the snow and ice that served as the backdrop for the Winter Olympics. Blue hands and markers with white super-luminova glow extend the chilly hues, while the discreet red and Seamaster names on every hour scale bring a balanced vibrancy to the grim aesthetic. The dial's outer edge scale makes the visual size slightly smaller. Rolex uses a similar trick (Maxi-dial) to make its watch appear larger than it really is. 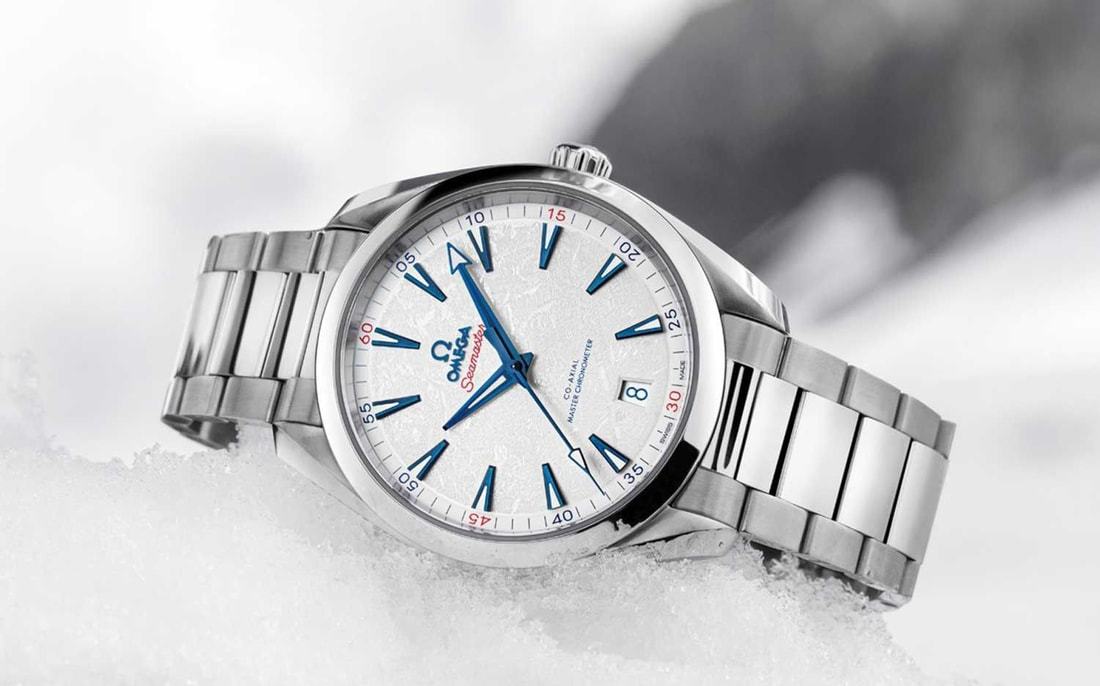